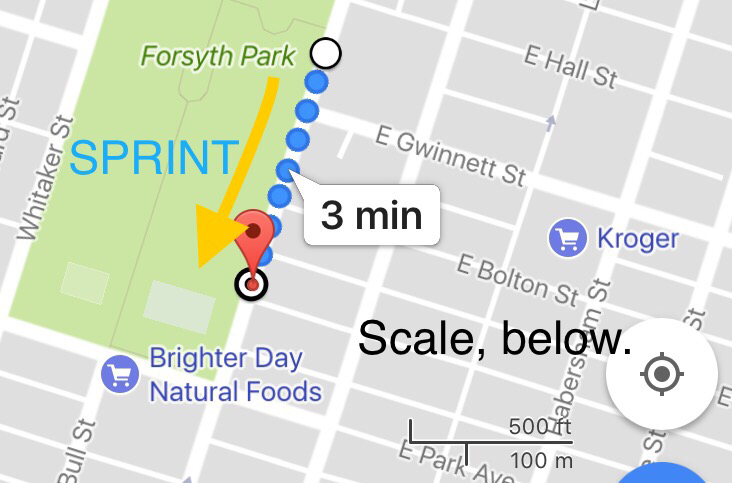 But since there’s no schedule, first will yet be first. Sunday’s activities wrecked my hamstrings in a great way. It’s tough to even pull off a mild forward bend (I still mean deeper-in than palms flat on floor).

…even my neck muscles are tight. It must, mostly, be from the sprints. Told dude at work the last was 100 yards, but it’s gotta be more like 500 feet to 200 yards. See the google map, below. All barefoot, but is that even worth mentioning. Shoes would be the odd occasion. Shoes would make me feel like I was wasting my time. I ran first, too see the action around the corner, just a bit. There were firetrucks all around but no smoke. Had a couple folks ask if I knew, they said they already snooped and saw nothing. So I went further around, quicker, and it was fun. So I did a couple little tiny sprints on sidewalk.

…back to Forsyth, some random guy with his outfit, a heart regulator, shoes, and normal routine is jogging along. I decide to sprint for real and gun it past him. A good little clip of a few hundred feet, and I slowed a bit too quickly. It felt like a bit of the sole of my foot may have peeled up. But no. Totally fine minus a slight abrasion where there was a grinding halt on the sidewalk. I feel like an Indian saying so, the ground barely touches your feet until you slow down then it scrapes if you do so too suddenly. But only on rocks like asphalt and concrete. And even then, you grow into the activity.

…I could so continue that barefoot rant and I want to, but yeah. I am lazily sitting in a parking lot where I allow half of what I think to flow quickly through my fingertips, watching folks hurry through the rain, to grab groceries, then hurry out to quickly leave and get in stupid traffic that is twice as bad in the rain and I don’t want to do that.

…I’m also sitting in a metal box, insulated by rubber footings, and comfortable to such a degree because I’m fairly confident in the technology that has been incorporated to its design.

…but I do have a car I will still very likely lose, a mortgage/house that has been in crisis mode for three years, the cat wants to eat, and I’m full-filling self promises that I really can’t afford.

…then “we are sitting on a rock hurtling through space” “and it’s spinning” as joe rogan constantly says. And there’s unknown meteors that may strike anytime. I’m okay. I’ve actually been wanting to ditch my vehicle for quite sometime, and who can afford to sell a car/truck when it goes immediately underwater upon purchase, then a year of no employment. No complaints, I’m fine. But that stupid ongoing payment, life drag of 400 then 100+ insurance then 2-500 gas. I’m sick of it and it’s impossible to get out of without a break. A pay increase. That may be coming. Who knows, I’m fine without, but I think even with this cashout of my BX stocks (and its 30% gains!!), I am so far behind that I would need to immediately get a new job/raise and I feel no traction at the current job so that I could beg some cash out of them. I’m well over 2,000 in debt to mortgage/car and I really need to hang on to dad’s truck for a couple months while my car gets repo’d from the Chevy place. I owe chevy 113$ so that’s retarded, but I want to just go pay; clean all my crap out; and call the bank and tell them I’m a piece of crap. So that sucks, but then go lookup REALLY DON’T LOOK — You cannot unsee things like this. Lookup Tibetan Sky Funeral. It is an insane method of disposal of a corpse (loved one).

… I’m excited about the whole gaming creativity project and really want to continue, even if I sideline, woopity do. That just means I’m obsessed or depressed but hopefully just obsessed with something new. Ahh the rain has fully stopped, I shall ride like an old lady on the wet road, with all the idiots, oh joy. 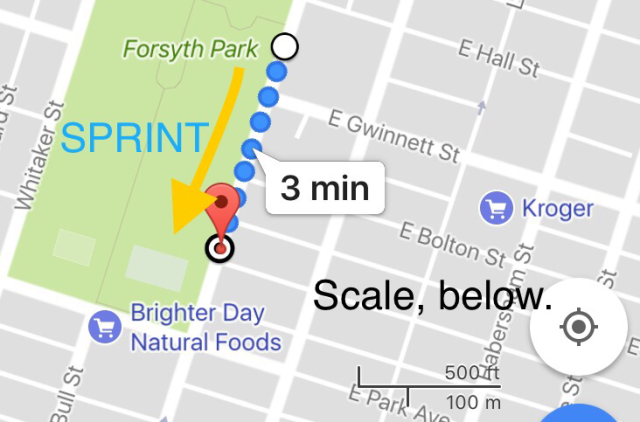